I’m going to present Winthrop-Young’s paper, and in particular, I will address the three different meanings that the notion of cultural techniques has received during its history. The probe I’ll use to highlight this evolution of the uses of the concept of cultural techniques will be an agricultural case. This way I will play during the presentation with an idea that is present in Winthrop-Young’s paper: that although the differences between the stages of this evolution are clear, there are liminal situations that inform us about the richness and the variety of possibilities of the cultural techniques approach.

I’ll start then with the first use of the word Kulturtechniken, linked to agriculture. It designated the large-scaled procedures aimed to transform territories. Procedures such as constructing water reservoirs, layering hills into terraces or draining ponds. That is, what we know as environmental engineering.

The probe I’ll present is precisely one of these Kulturtechniken. In particular, watering, the irrigation systems that fill periodically the yields with water. As we know, the distribution of water in agriculture is in most of the cases accomplished by surface irrigation systems, practiced through millennia, either via furrows or controlled flooding. Water reaches one side of the plots through a canal, and farmers open the floodgates for a certain amount of time, periodically, depending on the needs of the crops, the slope of the terrain and the qualities of the soil.

As Winthrop-Young observes, in this first stage “culture is that which is ameliorated, nurtured, rendered habitable and, as a consequence, structurally opposed to nature” (Winthrop-Young 5). The interest of the notion of cultural techniques, Winthrop-Young insists, is that this categorization nature–culture should not characterize cultural techniques themselves. They are the producers of this difference, as the image seems to suggest already. 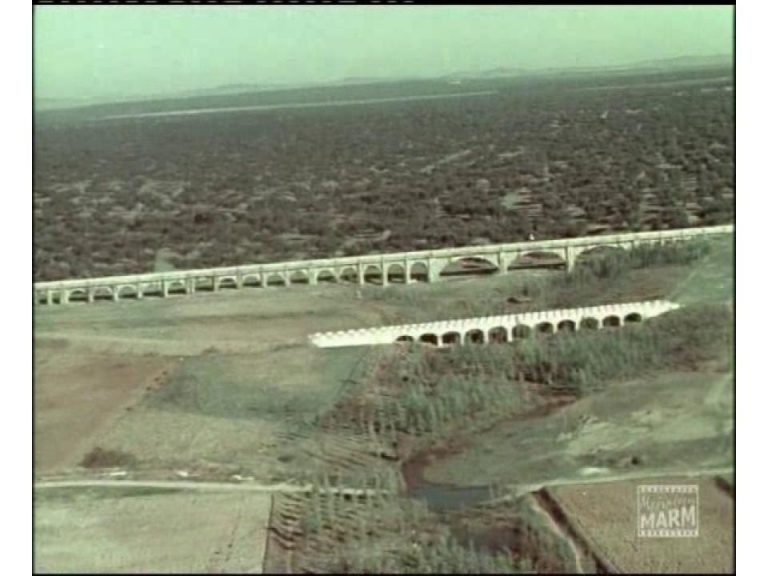 This image belongs to the propaganda of a large irrigation program that took place in Spain during the second half of the 20th century, were vast regions of territory were put into agricultural production. The farmers employed in these zones came mostly from areas nearby, which means that they hadn’t worked with irrigation crops before. These resulted initially in very low figures, and forced a redesign of the plan. Farmers were specifically trained, their activity was supervised during two years and their production monitored during the whole program (20 years).

This brings in the second meaning that cultural techniques received in the 1970s. In this case it concerns the idea of media competence, that is, the skills and aptitudes one needs to acquire in order to act as an operative subject within a media environment. This includes knowing what a button is, differentiating between ads and content in TV, etc.

Now, as Winthrop-Young observes, and I quote him: “So extensive are these processes [the media environment] that it was only a matter of time before observers started to question the precarious status of its three core entities: (i) the subject performing these operations; (ii) the basic concepts, ideas and notions that appear to guide these operations; and (iii) the object manipulated by these operations.” (8)

In our case, farmers where reshaped, they were not anymore peasants but workers in a program managed from above. Soils too, as the object of work, where reshaped: engineers where sent to each of the irrigation zones and a concept started to operate – the maturation of the irrigation land; that is, the time it takes for a poor and dry piece of land to start to produce at its maximum rate (10 years). The whole program was refashioned, in fact, becoming gradually a system oriented to the production of foodstuff rather than a social reform seeking the distribution of land.

What is at stake here is that the land, the people working it and the administration that managed it became all parts of a large-scale diagram. Here, chains of operations starting from irrigation techniques connect lands not only to water reservoirs, but to a new managing entity that had been used since the beginning of the process: the image, the aerial image. 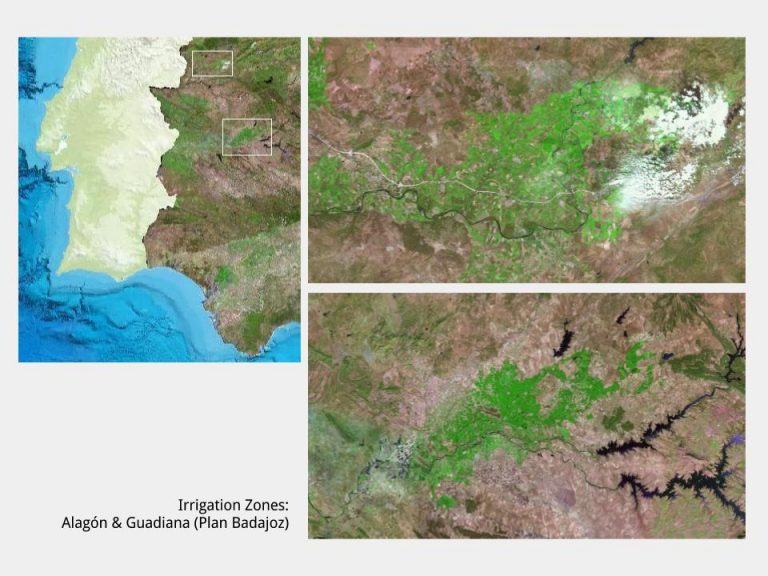 We are already within the third elaboration of the notion of cultural techniques. Here they refer to, and I quote Winthrop-Young, “processing operations that frequently coalesce into entities which are subsequently viewed as the agents or sources running these operations” (11). In this agricultural case, the regulated activity of opening and closing floodgates allowing water to flow and turn arid soils into green patches of land is linked to the instrumental role that aerial photography had in the design of the irrigation system. A role that will become clearer when we observe these developments from contemporary practices within agriculture.

Under this umbrella term of Precision Farming, devices on tractors are programmed to control the dispersion of water and chemicals upon information gained from satellite or aircraft based sensors that measure the wavelengths of radiant energy absorbed and reflected from the land surface. Soil moisture, surface temperature, photosynthetic activity, and weed or pest infestations are addressable with a resolution of a square metre, almost exactly the size of the irrigation system actuator. These systems land the pixel to the soil, with the aid of self-driving tractors, drones and variable rate technologies; they constitute the thick ground of operations that turn the soil surfaces into green screens of packaged sunlight, stocked water and soil minerals.

This was not present in the initial plans of this irrigation program, for instance, but there, aerial images were already in the agenda and working as part of the operations. And also, gradually, in terms of the descriptions of these processes, the shift started to be present: as an example, politicians in the Spanish case used frequently the metaphor of being painting green large areas of terrain to describe these processes.

I would like to finish with two final considerations. In the paper, Winthrop-Young brings in the notion of “Eigenpraxis”, coined by Cornelia Vismann, which designates the importance of the agencies put into operations inside their milieux and within the mix of agencies involved. This is something that this case puts it clear: the hesitations during the development of the large-scale program itself show that there was not a master-slave type of relation in this assemblage of technologies, management and operations on the ground.

This eigenpraxis characterizes also the role of the soil itself. It Is important to highlight that these developments in agriculture have been taking into account the promptness to disaster these large-scale engineering procedures involve. The Dust Bowl as a natural reaction to the mechanization of agriculture in the Great Plains, or the salinization and euthrophication of water were and are present inside these developments. Which signals in turn a noticeable absence in the expression “cultural techniques”: there’s no reference to a non-human nature. Nature-cultural techniques? Or, rather, medianatures (Parikka 2013) ?