This week, we opened up the Smash Box.

Opened Up the What?

After a successful kickstarter in 2017, the team at Hit Box — H.B. Dustin in particular — developed and produced the Smash Box, an all-button fighting game controller made just for Smash games (it ships with a Gamecube cable). The intention for the Smash Box was dual: to present players with an alternative yet familiar controller style that is easier on players’ hands; and to allot full control of the hardware for optimal customization. Players can set up to 3 button map profiles, swap in custom buttons and program tilt-attack angles. All this, wrapped into a sleek acrylic box that sits lightly on players’ laps — a common sight to most of the FGC (fighting game community). 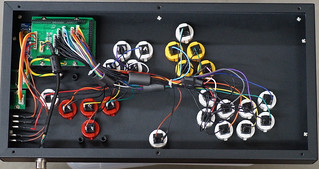 After some struggle removing the screws encased in rubber on the back of the box (Japanese pliers designed for removing screws with stripped threads did the trick), we managed to crack open the Smash Box. The inside is truly beautiful. The wires are a multitude of colours, carefully coded and very neatly bundled together with zip ties, and no bodges, hacks or half measures in sight.

We were happy to discover that the Smash Box uses Sanwa OBSF 24 mm arcade buttons, which are both high quality to begin with, and easy to swap out if you want a more adventurous colour scheme. 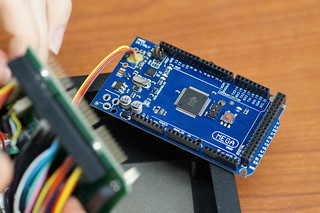 The box uses its own custom board to group the wires together, and then routes them through an Arduino 2500 Mega. This is a sensitive finding, as Arduinos programmed with macros (multiple inputs with one button) are banned in competitive Smash settings. However, as the micro-controller here is only used to mirror the interface of the Gamecube controller, we believe there should b e no issues for competitive play.

The Journey to Smash Box Mastery

Before we opened the box, I was testing it on the Depot’s Wiis. Dash dancing, one of the most basic of SSBM’s advanced techniques, had never felt that good. It was so easy to slam the left and right button in succession, as opposed to trying to wobble the Gamecube’s analog joystick side-to-side.

More advanced techniques will take more time for me to learn, especially after developing 5 years of muscle memory for SSBM on a Gamecube controller. I still am struggling to complete my wave dashes successfully, but I know practice makes perfect.

One of my favourite parts of learning to use the Smash Box is listening to the buttons’ clicks; it sounds different than traditional Gamecube clicks. I feel like I can almost press these buttons louder, because I can rest the box on a table. It will be interesting to see how the audio feedback affects my play style. 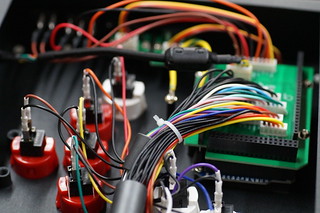 After discovering the interchangeability of the buttons, we promptly ordered new ghost/clear buttons (Sanwa OBSC) from RetroActive Arcade with colours to mirror the Gamecube controller’s mapping. The stock tri-colour layout that the box comes with is not particularly intuitive, making it difficult to learn and remember where each function is. I’m hoping the new button colour scheme will help me learn to use this hardware more efficiently, rather than referring back to the cheat-sheet while practicing. I am looking forward to swapping these buttons in myself, as I have only dabbled with a few hardware mods for Gamecube controllers. The controller cable port on the outside of the box also presents some issues — it’s difficult to line up properly, and the shifting of the pins initially created some connectivity issues for us — so we may replace it with something else at some point. It’s all part of expanding my technical knowledge of fighting game hardware.