NextPolitics of the Archive: Through Plugs, Publications and the History of Electric Labor
Media ArchaeologyWorking Notes

Virtual Boy to the Vive: VR and the Rhetoric of Immesion

One of the first forays into contemporary VR was the Sword of Damocles , the first fully integrated head-mounted-display (HMD). “The system itself consisted of six subsystems: a clipping divider, matrix multiplier, vector generator, headset, head position sensor, and a general-purpose computer—which would make these the components of the first virtual reality machine as we know them today”  (Wikipedia). For me, this project connects the discourse around teleprescence to modern attempts at virtual reality.
One such attempt was Nintendo’s Virtual Boy. It was designed by Gunpei Yokoi. Professor LeMieux mentioned Yokoi’s notion of withered technologies: essentially, that “toys and games do not necessarily require cutting edge technology; novel and fun gameplay are more important” (Wikipedia). It’s a refreshing sentiment, and it counterveils the trend in the gaming industry to push for technological advancement (particularly graphical advancement) above all else.

Having access to the VR boy’s packaging and documentation was a boon. One of the first things I noticed was the manual warning page:

In contrast with this glaring red admonition, consider one of the most recent commercial VR products, HTC’s Vive. The Vive’s manual is far more restrained in its warnings. In fact, there’s no mention of nausea or VR sickness at all in its documentation.
Returning to the Virtual Boy, I also looked at the television advertising for the virtual boy. Ubiquitous in these commercials was the rhetoric of immersion. “See it now.. in HD”. These commercials use the same logo, but I didn’t notice any aesthetic continuity between the virtual boy’s packaging and the virtual boy commercials. I think this speaks to the division of advertising and technical documentation at Nintendo. However – the commercials did feature red prominently, and the redscale images connote night-vision goggles. The robot-chasing-human plot of the commercial also signal- the blurred boundary between military technology and gaming peripheral.

One of the most striking features of the virtual boy was how isolating it felt to use the device. One isn’t encumbered by the weight of it, as is common with most head-mounted-displays. Instead, stooped above the desk with one’s forearms for support, an alien tripod supports the plastic porthole and one peers into the the device. It’s hard to imagine sharing the headset. In contrast, the Vive headset’s display is mirrored (usually with some processing to create a composite of each eye’s display). This mirroring is introduces an important social element to the experience. It foregrounds (the mirrored view that the screen displays often occludes peripheral elements of the screen) the multiplicity of representation in games.

The lack of a secondary display also poses a problem for documentation. For example, the virtual boy’s right lens is slightly wonky. Here’s a shot of some glitchiness taken with my phone’s camera:

In fact, these shots remind me of the crooked cosmos twitter bot: 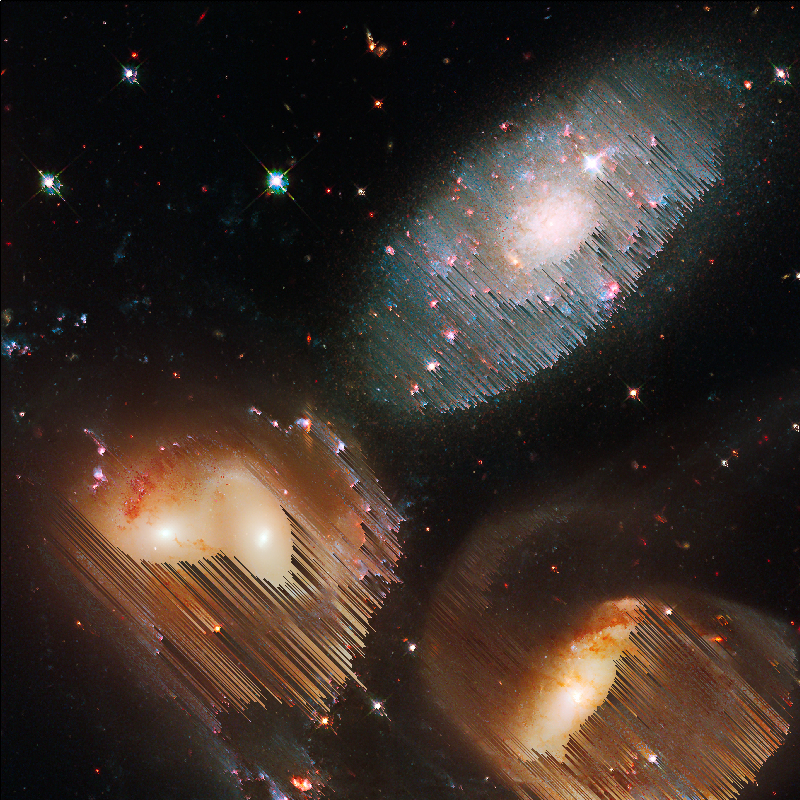 I looked into the repair process for the virtual boy’s lens, and it seems pretty involved.

A research question emerged: what would it take to make a project run on the virtual boy, and what would that development process look like?
I was able to find the virtual boy homebrew reference guide and the technical specifications for its graphics pipeline. Simply dumping a rom from a virtual boy cartridge seems like an intensive technical task.

However, there’s an easier approach to development on the virtual boy: the Flashboy lets developers flash roms to a custom cartridge that’s playable on the virtual boy. This seems like the best option for homebrew development, but it appears to be difficult to get a hold of one. In light of how difficult it is to put a rom on to a virtual boy readable cartridge (without the flash boy), the easiest approach would be to simply test a rom on contemporary VR hardware.

In fact, there is a method for playing virtual boy games on contemporary VR gear.
Although, for the vive, it requires a daisy chain of emulators.

Revive uses an occulus rift emulator to emulate the virtual boy. The whole process is outlined here.
One of the advantages of running the virtual boy in emulation (in addition to the ease of documentation — one can simply take a screenshot) is the ability to change color modes.
Compare these two shots from the virtual boy’s Wario game:
In redscale:

And black and white:

With access to a Flash Boy, I think I’d like to return to this project – I can think of no better illustration of Yonoi’s withered technology than to re-appropriate the virtual boy for an art project.